Summer is almost over. Another season gone by. My to-do list is still a mile long and growing! I had so many things I wanted to do and I don’t feel like I’ve accomplished much. I could stay in that place of failure, frustration and self loathing but I won’t. That doesn’t, won’t serve the higher good. What I can do is look at what happened this summer. When I do that I can see that much was accomplished, some good, some bad, some that did in fact derail me but needed to be done or were unplanned.

For instance, I started the summer out with a trip to Illinois for some required continued education. It needed to be done and now I won’t have that on my plate next year. Thumbs up! At the same time my daughter and her fiance moved in with me.  It was only supposed to be a few weeks but it turned out to be a few months. This was unplanned and definitely contributed to the delay and derailment of things on the to-do list! But… as a parent you help your kids out, right? It was for a good reason, better job, better opportunities and now their stuff is completely moved out of my barn and I can get back on task.  I had not realized how settled into the “empty nester” role I had become. LOL

I also had some truck issues. HUGE derailment there! Without a truck there were a lot of things that just couldn’t happen. Positive side? I bought a 1996 F250 to get us through while I fix my F350 so now the ranch has a second truck. We’ve talked about this needing to happen but I probably wouldn’t have done it if it hadn’t been out of necessity. Thanks Universe!

Another challenge this summer was my husband’s work. He entered what’s called “turn around” in mid July. What that means is a straight night shift, 4 p.m. to 4 a.m. and anywhere from 6 to 7 days on. With those hours and only 1 or 2 days off leaves him pretty exhausted. I want him to rest and do what he wants to do with his limited free time but that means I don’t have any help. Many of my projects I just can’t do alone.  That’s where another lesson came in. We have 1 daughter who lives here in town and comes out daily to do chores in exchange for horse board. I have had to delegate small tasks to her and trust they’ll get done. I also have had to learn to ask for her help. 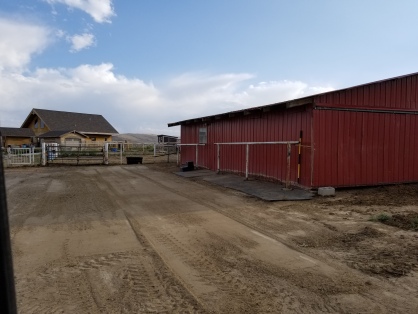 Our weather here in Wyoming can shift drastically and our winds make outside work dang near unbearable and undo-able at times.  My plans for the day shift and change according to the weather. That makes it tough to plan when you have a helper. It means taking another look at the to-do list, re-framing it and dissecting it.  It also means prioritizing! The area around the barn and the lean-tos really needed some attention. And… it needed done before winter. It has been horribly windy but when you’re inside the air conditioned cab of a Kubota skidsteer that doesn’t really matter!! For whatever reason, I didn’t think of that earlier in the summer!! Duh!!! Since that BFO dawned on me I’ve been working on moving manure, leveling and filling low spots on those blustery days! I can only imagine what my mini dust storms might look like from space!

So while my list is still long, this summer I have learned to work more efficiently. I have learned to bend like a reed in the wind and go with flow. I’ve learned to let go and move on. Lessons that will serve me well in life! And I’ve successfully battled the to-do list nemesis!!

This site uses Akismet to reduce spam. Learn how your comment data is processed.

This Is My Truth Now

Through the Horse ~ Michelle L. Sidun

A Horse and a Wizard

The roots and wings of inspirational leadership